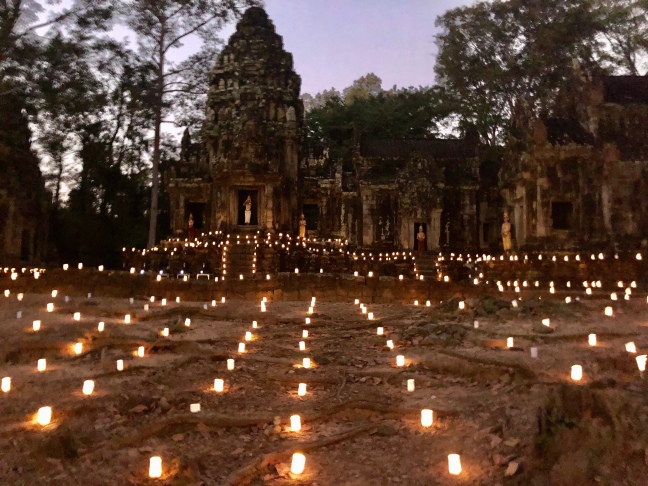 I can say I had always lived an active lifestyle that includes visits to the gym and when it became boring, I moved to boxing and Muay Thai and then yoga. So, I juggled these work-outs and even did a combination at some point but never got into running. I got interested from the sharing of my office mate and close colleague, Div, after he participated in the Angkor Wat International Half Marathon 2015 where our company is a major sponsor of. He related the gala night before the run held inside Angkor Wat with one of the temples as the back drop. It seemed so interesting and it was affirmed by two of my team members, Bimbo and Nicole, who participated in 2017.

The pre-run gala dinner with a temple as a backdrop lit by a thousand candles.

So on July of 2018 at age 52, I started training to run 10K in the same event that is held annually in the 1st week of December. I downloaded a training app and began my training. I realised running 5 minutes straight is challenging even if I was relatively physically fit. Indeed, one cannot join a marathon at whim as it requires months or even years of building endurance lest you either faint or get injured.

To keep me motivated, I encouraged my teenage daughter, my sister and her son and even our househelp to run too and I would register everyone in fun runs. I started with 5K then progressed to 10K just in time for the Angkor Wat run. I also encouraged a couple of my team members to participate so we can travel together. That’s how my “destination runs” started.

That’s how my “destination runs” started.

As a UNESCO world heritage site, what draws tourists to Siem Reap, Cambodia is Angkor Wat – the largest religious monument in the world! Events held in the complex are limited and running with those amazing temples of almost a thousand years old is just so surreal. The run route is so amazing passing through a beautiful lake while the sun rises colouring the sky red orange is magical! You run through arches and bridges that are attractions in themselves which speak of so much history; you run surrounded by several centuries-old trees that grew on walls and structures like nature conquering what men made. There’s no wonder it is such a popular event with over 10,000 runners that year, over 5,000 are foreigners from 76 countries (www.runsociety.com).

Training for 10K requires at least 3 times a week of run days building endurance to be able to run at a good pace and after doing it for almost 5 months, I got hooked into it. I went back to run half marathon (21K) in 2019 with my husband and sister, Ging (in orange in the photo) and another officemate and team member, June, running 10K and would love to do it again!

From the time I discovered running and started training in July 2018, I have never stopped. I continue to run at least three times a week and my husband has joined me in this passion which we have incorporated in our family travels. Oh yes, I am looking forward to run my first full marathon and I hope it will be soon.